I saw I, Daniel Blake (the comma is important) sometime ago but it left an indelible impression on me. It is a film with its heart in the right place, and it is inspired from reality. I will be talking about what I felt after watching the film. Though I have tried not to be specific you will get an idea about the general premise of the film so spoilers ahead. 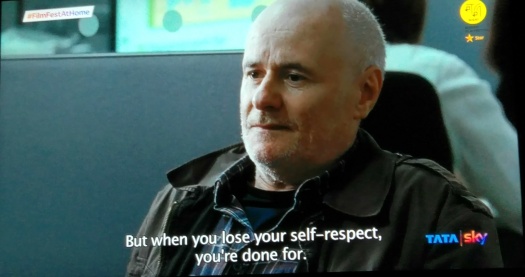 What is a man with a heart condition to do? Forced to eke out a living when declared fit by the state but not actually in a condition to work – a conundrum I hope no one ever has to face. We live in a world where government apathy is so systematized that it doesn’t seem like apathy at all. I thought we in India had bad governments but the rest of the world isn’t so different when it comes to denying upstanding taxpayers their rights and making them run from pillar to post.

You are entitled to benefits but the State has frozen it. Along with Daniel, we see the plight of another young woman with children. She feeds her kids but goes without meals herself until she nearly faints with hunger. She’s desperate for any kind of work because she has to look after her kids. She steals essentials from the supermarket because she doesn’t have the money to buy them. What doesn’t kill you doesn’t always make you stronger. It breaks you, tests you and sometimes you keel over. If you survive, you somehow find the strength to keep walking, hoping against hope that your life will limp back to normalcy. What is normal anyhow.

India doesn’t even have these kinds of laws or these benefits so we are not even in the running to be an ideal or a model country (cue in derisive laughter). A country is known by how it treats its poor and helpless citizens, both young and the old, and in that regard India is a terrible country. And I found out our colonizer Britain is no better in spite of having amassed wealth (by leeching off from countries like ours) and in a much better position to help its people.

The dignity with which Daniel Blake carries himself in spite of all odds will break your heart. Even the protest was dignified. Trying to do everything right by the book Daniel reminded me of my sweet tempered grandpa who didn’t have mean bone in his body. They don’t make men like that anymore. He used the same kind of phone my grandpa used and doesn’t know how the internet works either. Upstanding honest citizen, a man who paid his dues on time and lived by the rules. He took care of his sick wife and worked full time. This is a good man. And what did he get for it? A big fat nothing. That’s life for you. You can’t be assured of a dignified death even though you have lived your life with dignity.

You know you have successfully become an adult when things doesn’t work out the way you have imagined them to and you carry on living your life without letting it completely break you. Or at least try to. We keep looking for meaning and reasons for things that happen. Maybe there’s no great meaning in life. Connecting the dots would be meaning enough. We just bumble along searching the great unknown for everything to ultimately make sense.

Hope can always be found when you need it. If you are looking for it, that is. I learnt that from Harry Potter. (J.K Rowling is the philosopher of our times.) For some reason it is always found in the most unlikely of places (thank you Luna). So keep your eyes peeled. I, Daniel Blake is ultimately about hope for me despite the bleak scenario that plays out. It shows people standing with each other. A shred of humanity is all you need to survive. You are not alone.

I am a natural blabbermouth and through the years I have found the written word to be a more potent outlet to drive home my point (than talking at people?). And the blog was born. Here I write about whatever catches my fancy, and I hope it's of some interest to the reader(s) so that I don't make a complete fool of myself (which I effortlessly do IRL) in the virtual world. See you around :) View all posts by eternaloxymoron