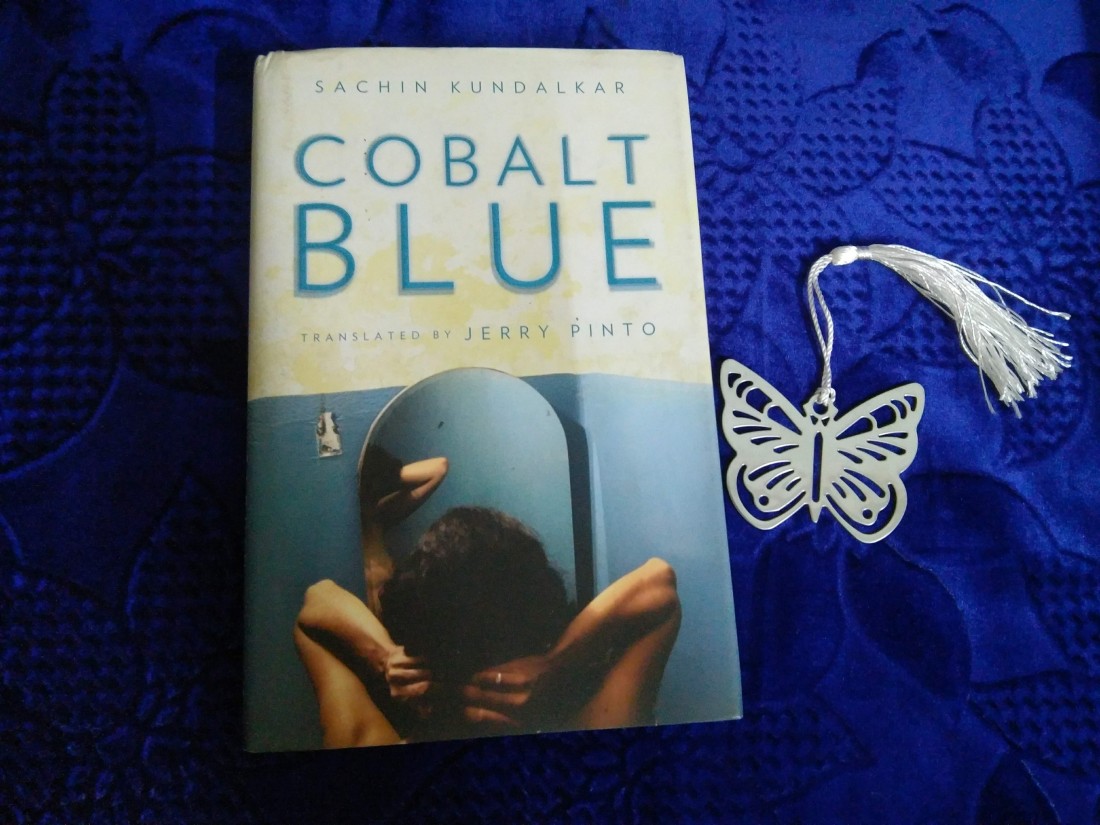 I started Cobalt Blue written by Sachin Kundalkar (of Aiyyaa fame)  in Marathi and translated by Jerry Pinto into English , before going to bed and couldn’t stop till I fell asleep (obviously). In the morning I finished the few pages that were left, wishing with all my heart I had more to go on as the day stretched on. It is a thing of beauty with simple uncluttered prose but heartbreaking since it is, after all, about heartbreak. Not the why, how and when of it, but something more organic.  If you ever had your heart broken or stomped on or ripped out by somebody you will get it.
Spoilers ahead.

A paying guest enters into the middle class Joshi household and siblings Tanay and Anuja fall for him, each unaware of the other’s affair with the same person. He vanishes without a trace leaving these young adults heartbroken. How they deal with the memories and come to terms with it forms the story.

The paying guest is a painter, who is very comfortable with his own solitude and bohemian in his approach to life. Tanay was in the need of a friend. And, in walks the painter who Tanay instantly connects with and is drawn to, unlike anyone until now in his short life. Anuja was intrigued by the paying guest who was so different than anybody she ever knew and falls  for him. Being unnamed added to his elusive nature.

The first part of the narrative is by Tanay, who speaks directly as if addressing the paying guest in words written or spoken. He remembers things from their interactions and tries to understand how he was in the dark. And at the same, he is processing his grief at being left so abruptly. The second part of the narrative is by Anuja , who in her diary entries, goes back and forth and tries to make sense of events that happened.

The book raises a lot of questions about what is acceptable in the society and how society impinges on individual freedom curtailing their desires to be sacrificed at the altar of societal normalcy. In the book, Anuja wasn’t permitted to go upstairs where the paying guest lived but nobody minded Tanay practically living with him.There is talk of a homosexual movement and there are meet-ups to discuss and do something about it which was a step ahead at the time the book was published, in 2006.

There were some Marathi words I didn’t know the meanings of and I took them to mean whatever it meant in the context and imagined it when I couldn’t get the meaning. I didn’t pause even when things resonated with me. Like, when Anuja is talking about why she puts a date on her diary entries.

As Jerry Pinto points out in  the translator’s note at the end of the book, there are no timelines and no asterisks that demarcate the past from the present. There are no chapter endings; it all flows without chapters to guide you though Anuja has a few diary entries which are in chronological order.  I realized how accustomed I’m to the breaks that chapters offer.

Reading about the events from both Tanay’s and Anuja’s perspectives made me think that it could all have been avoided if they had confided in each other. Siblings. Do they really know us? They know our daily persona, our habits but do they know about our inner world, our deep seated longings, burning hopes and dashed dreams. Rarely. Anyone who has grown up with brothers and sisters (identical twins are exempted) this would leave them with deep questions.

The book ends abruptly (or so I felt). I found myself wishing I had more details about the mysterious painter.

spoke volumes to me.